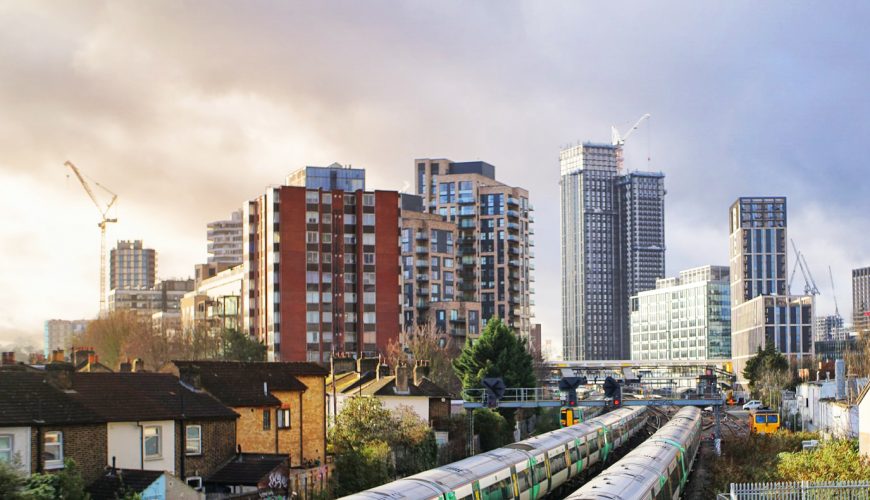 Every compass point of the capital is distinctly different. So, what does South London have to offer? More specifically, what’s new for this part of London’s property market? Read on, and explore our guide to some of the top new build homes developments in South London.

Where is South London? Which parts does it cover?

South London is a highly varied collection of boroughs south of the River Thames. While ‘technically’ every London borough south of the Thames is ‘South London’, both South East and South West London are very different in look and feel.

‘South London’ areas include the southerly suburban belt areas like Croydon, Sutton and Mitcham. If you want more specific details on the South East and South West London areas, click the links for our dedicated area guides

Given its diversity, it’s hard to make generalisations about what it’s like to live in South London. However, there are a few things that apply almost anywhere you look south of the Thames.

Firstly, South London is very green. It has a more leafy, suburban feel than its northern counterpart, particularly once you get further south towards the outer boroughs. Plus, the Surrey Hills Area of Outstanding Natural Beauty is on your doorstep. This gives South Londoners a foothold in the peaceful country life, even while they enjoy all the benefits of being in the capital.

Additionally, you’re spoilt for choice in terms of access to culture, retail, entertainment and dining scenes. Wherever you are in South London, you aren’t far from of major hub for all of the above. While North London may hold a greater density of ‘big ticket’ tourist attractions, there’s plenty of culture, convenience and charm to be found all over South London.

Overall, if you’re looking for the London lifestyle but at a more relaxed pace and a bit more space, choose South London.

Top 5 Places to Live in Croydon

Average rent in London for all 32 boroughs

5 best places to live in Brixton

Admittedly, South London is not quite as well developed in its transport network infrastructure as the northern portion of the capital. However, it is still exceptionally well connected, and offers lots of viable means of getting around. Major A-roads connect the different boroughs, and the orbital M25 makes getting out of London and toward other major centres a breeze.

Overall, the southern half of London is much worse off than the north in terms of London Underground lines and stations. It only has 29 stations compared to the over 250 in North London. However, upgrades are in the pipeline, with a substantial southbound extension to the Bakerloo Line due for completion in 2028/2029.

To compensate, TfL runs a substantial bus route network across South London. In addition, there are good Overground rail and ThamesLink connections. Plus, Croydon has London’s only working tram network, which transports over 30 million people annually!

At the time of writing (February 2022), the recorded average for South London property prices is around £747,500. This is according to Zoopla, though bear in mind that this covers a vast range of property types. From luxury new build developments to charming period homes and modest flats and terraces, South London’s property market is extremely diverse.

For a more detailed understanding of the prices you’re likely to encounter, it’s better to search by specific boroughs or districts. However, bear in mind that all South London property enjoys a premium price due to its proximity to all the benefits the capital has to offer.

If the idea of living south of the river appeals to you, then it’s time to take a closer look. The following is our latest list of the 10 best new builds in South London, according to verified resident reviews. As always, these rankings are determined entirely by the scores given by residents, who are the ones best placed to judge!

Ten Degrees, by Greystar, sits in Central Croydon and is our currently top-ranked new build development for South London. Comprising 546 apartments over 44 floors, it features a games room, rooftop gym, pet spa, screening room and co-working spaces. Residents also have access to a wide variety of transport links, allowing them to reach central London in just 15 minutes. Residents love the sleek modern style of the development. They also give the incredibly helpful management team near full marks.

The Quarters by Bravo

In second place is the long-term premium letting scheme The Quarters Croydon, which offers residents a stylish and convenient base in this thriving South London suburb. There are 151 high-specification studios at the development, with Croydon station only a 4-minute walk away. Trains reach London Bridge in just 14 minutes, while Gatwick Airport is also easily accessible.

Read reviews and details of The Quarters Croydon, CR0

In third place, The Well House offers one, two, three-bedroom apartments and penthouses. Residents have access to great on-site facilities, including a concierge and an expansive gym. Additionally, the development is a two-minute walk to Sutton station, providing rail services directly into Central London. Flats here are very spacious and offer plenty of storage solutions.

Read reviews and details of The Well House, SM1

Our fourth spot goes to No.26, which offers 183 studio, one, two and three bedroom apartments managed by Native. They all include high-end kitchen appliances, Conran furnishings and king-sized beds. Additionally, being two minutes from East Croydon train station, it also enjoys direct connections into central London, Brighton and Gatwick.

Read reviews and details of No.26, CR0

Taking the middle rank on our list is Vertex House, also located in the heart of Croydon. Run by Zest Living, part of the Durkan Group, the development has 98 total residential units available for rent, shared ownership and as affordable housing. The apartments range in size from one to three bedrooms. Residents routinely mention the high-quality finish of the bathrooms and kitchens, and say that homes here are exceptionally well insulated.

Croydon stakes its claim to another spot on our list, this time with Bauhaus, a Durkan development. It comprises 189 1-3-bedroom apartments with sizeable community and retail spaces on the ground floor. The development is also conveniently placed between East Croydon and South Croydon stations, and is only a 10-minute walk from both.

5 Bedford Park, by Way of Life, is a collection of new-build apartments, also in the heart of Croydon. The building features 82 units – a mix of one and two-bedroom flats. Residents are just a 10-minute walk from both East and West Croydon stations, which provide access to London’s National Rail, Tramline and Overground services. Residents have plenty of praise for the luxe and modern interior design of apartments here.

At number 8, Saffron Square is a huge, 43-storey development from the Berkeley Group. Currently, the tallest building in Croydon, its distinctive purple and red façade pierces the skyline and enjoys easy access to the area’s main retail hubs and transport links.

In 9th place, New Mill Quarter, by Barratt Homes, sits in Wallington moments away from Beddington Park. Comprising 440 1-2-bedroom apartments and 3-4-bedroom houses, this development offers links to London Victoria in 30 minutes. As well as this, residents benefit from on-site gardens, a Lidl supermarket on the ground floor and an on-site café is in the pipeline.

Finally, at number 10, New South Quarter is a Barratt London development offering 496 properties ranging from studios to one, two, three and four-bedroom apartments. The development itself is conveniently located in-between West Croydon station and Waddon station, just a 15-minute walk from both. Many of the flats overlook Wandle Park and the River Wandle, and all of them offer a spacious design that makes the most of the ample light coming in from their big windows.

Interested in seeing more of what South London has to offer? We have dedicated area guides for Croydon and Sutton. Here you’ll also find details on some of the best new build homes developments in South London.