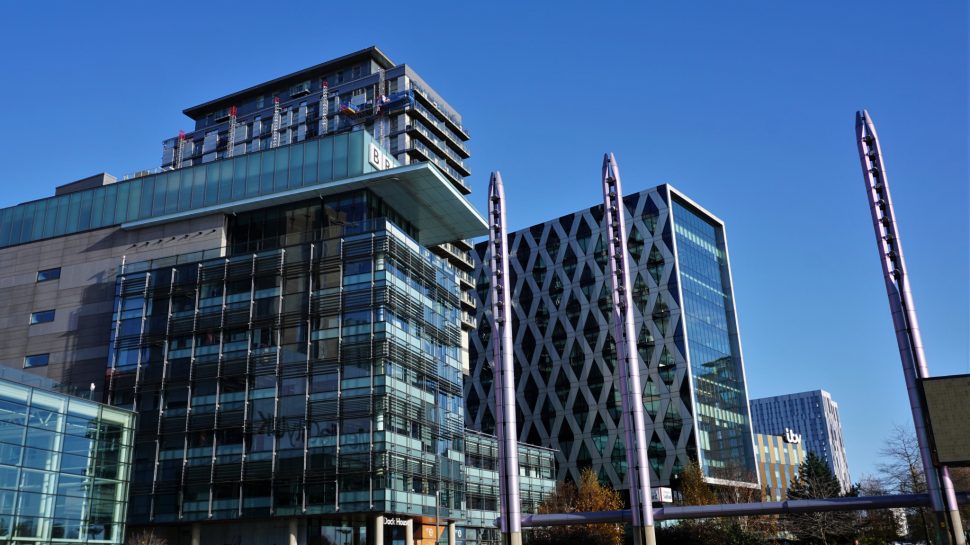 Manchester is at the centre of an unprecedented development boom. With high rent yields and affordable prices, it has quickly become a magnet for investors. We highlight the areas to watch and explore the bigger trends in property investment Manchester is currently experiencing.

If you happened to catch the BBC’s four-part Manctopia series, you’ll know that Manchester is now one of the UK’s fastest growing cities. In a single planning session in September 2020, Manchester councillors approved more than £1 billion of development for construction. Hundreds of millions of pounds have continued to pour into Manchester since then, as the city completely reimagines itself.

With Manchester’s population expected to double within five years, this is a growth explosion that needs a property construction boom to support it. So, which parts of Manchester city centre and the Greater Manchester area should property investors be looking at? Let’s explore some of the areas set to benefit most from the property investment Manchester is currently attracting at a record rate.

Where to buy in Manchester

The heart of Manchester is also, unsurprisingly, at the heart of the construction boom. Here you’ll find many of the biggest headline property development projects in progress, with new ones breaking ground almost monthly.

Last year saw the approval of a £300 million co-living development on First Street that plans for 2,224 bedrooms across four blocks including a 45-storey tower. At the same time, the greenlight was given to a £222 million, 350 apartment co-living tower on Water Street.

These are just two examples of how the city centre is attracting huge investment across a widening range of projects. With another 600,000 people to house before 2026, the need for housing isn’t going anywhere.

The new home of the BBC, ITV and a host of other media companies, Media City is one of Manchester’s biggest success stories. The arrival of these internationally recognised names has brought with it the need for masses of new housing, restaurants, shops, transport infrastructure, parking and more.

Phase 1 of Media City was delivered in 2011. Phase 2 began construction late last year, and promises to be a massive undertaking – doubling the size of the original site. This is a £1 billion expansion plan delivering 1,800 new residential units and 50,000m2 of new office space.

East Manchester has been on a transformation journey for the last three decades. At the heart of its renewal was the construction of the Etihad Stadium and the surrounding sporting complexes that make up Etihad Campus. Successive rounds of investment in the area have followed, prompted again by Manchester Council’s Eastlands Regeneration Framework (ERF 2017).

This has seen thousands of new homes spring up, along with commercial districts and high-quality infrastructure. Last year saw plans approved for a new £350 million music and indoor sports arena to be built next to the Etihad Stadium. This is another big win for the Eastlands’ development prospects, with plenty more investment likely to follow.

This is a thriving area that established itself as one of the city’s hotspots for creative, digital and tech-based companies. The council wants to repeat the phenomenal success of regenerating the “front end of Ancoats” with new plans for the Poland Street area (“the back of Ancoats”).

The plan is to transform it into the same kind of high-quality, housing and office space developments seen in the rest of the neighbourhood. Alongside high-rise rental apartments and offices, there are also sites being identified for much-needed affordable housing. There are also ongoing plans to turn the £37 million Central Retail Park plot into a green neighbourhood.

Right next to Ancoats, New Islington is also getting the urban renewal treatment in a big way. New housing prospects include Lampwick, a 213-home development with a 5,000 square foot commercial element. You can also see Urban Splash’s Mansion House and 17 new town houses under construction on Piercy Street.

Plans are also in motion to redevelop New Islington Green with five 8-storey office buildings and a £5 million park. The plan is to strengthen New Islington’s links with Ancoats and emulate its success in creating desirable homes and jobs with creative/tech companies.

This is one of the many up and coming areas in Manchester, one that deserves increasing attention. Companies are investing over £75 million in new housing developments currently in the area. The Crusader Mill and Phoenix developments offer 200 apartments for sale between them.

There’s even been a £2 million allocation by the council to undertake a long-overdue renovation of Piccadilly Gardens. This well-worn public square is getting a major facelift, with improved lighting, repaired paths and a new children’s play area.

*Please note, the following are the top 5 rated developments on HomeViews that offer homes for sale. I.e.: excluding ‘rental-only’ developments.

At the top of our list we have Wilbur Basin. Located only a 5-minute stroll from Castlefield district of Manchester City Centre, it features a variety of apartments across four district blocks. Residents have access to a wide range of facilities and amenities, including a gym, cinema, residents’ lounge and meeting rooms as well as a 24-hour concierge service.

Next up, the Hacienda is an iconic development, situated in the heart of Manchester, and is the former home to the world-famous nightclub with the same name. The development offers easy access to all city centre amenities and transport links. Also, Deansgate and Manchester Oxford Road train stations are both just a short walk away.

In at third it’s Deansgate Square by Renaker. This residential development sits in the heart of Manchester city centre, and has designed by SimpsonHaugh & Partners. The development is made up of four sleek, glazed towers which reach as high as 64 storeys, providing 1508 luxury apartments and exclusive penthouses, some featuring private winter gardens. The scheme incorporates high end residents’ facilities including 25m swimming pool, indoor tennis court, 1,900 sq ft gymnasium, Leisure Suite, a dedicated resident’s lounges and relaxation areas.

One Regent is also situated in the historic Castlefield district of Manchester. It comprises six town houses and 301 apartments across several buildings, some as high as 26 storeys. The development is only a short walk away from the city centre, Deansgate transport hub, as well as only a 10-minute walk away from the central business district in Spinningfields. BBC Media City is also only 5-minute drive away.

Read reviews and details of One Regent, M3

And finally, in at number 5 is Irwell Riverside, by Urban Splash. This picturesque development sits in Salford, right on the banks of the River Irwell. Residents here benefit from great riverside views, resident gardens and parking, and from being within walking distance of Manchester city centre. Residents also say they love the unique design of the buildings and apartment interiors.

If you want to explore more of what Manachester has to offer, check out our full area guide. Here you’ll find out more about the up and coming areas in Manchester and what it’s really like to live in different property developments across the city.