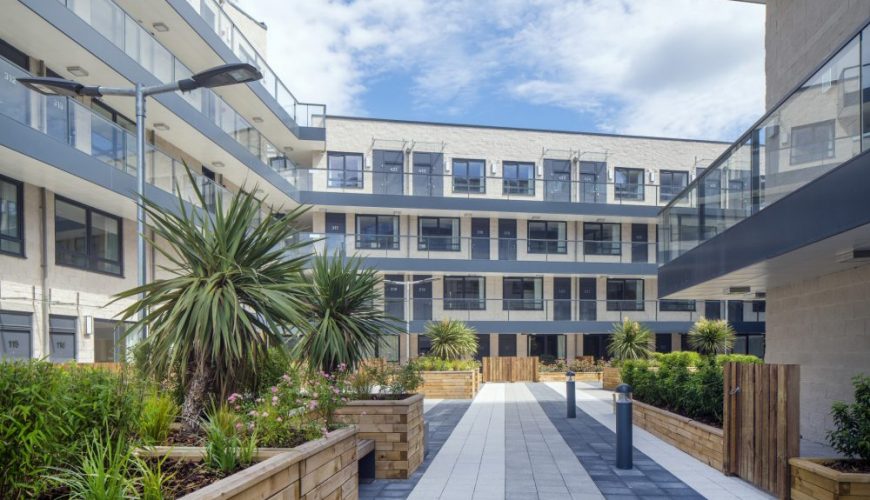 Looking to buy or rent in one of the least densely-populated London boroughs? Then a new home in Hillingdon may be the perfect fit. But which developments in the area represent the best value for money? Read on to discover more about this leafy borough – and which new builds our resident-reviewers voted into the Top 10.

Hillingdon is a large borough in West London, yet the second least populated. Its main towns include Hayes, Ruislip, Northwood, West Drayton and Uxbridge. Heathrow Airport lies to the south, straddling the border shared with neighbouring Hounslow. The Colne Valley Regional Park forms the boundary along the west side, with Watford to the north and Harrow and Ealing to the east.

Hillingdon’s relatively small population (by London standards) has not affected its local economy, which outranks many London boroughs and districts countrywide. While Heathrow Airport is part of the borough’s success, the area is also home to over 200 open green spaces spreading across 1,800 acres. This is because Green Belt land forms much of Hillingdon, alongside the northern stretch of Colne Valley by the River Colne. Some of Hillingdon’s many parks and gardens include Norman Leddy Memorial Gardens and Lake Farm Country Park in the south.

Families with children will be interested to know that Hillingdon has planned a huge school expansion programme. Higher education is already provided by Brunel University and Uxbridge College’s Uxbridge and Hayes campuses.

Hillingdon benefits from a multitude of National Rail and London Underground services, including Heathrow Central and terminal stations. The airport can be accessed via the M4, which then connects to the M25 in the west. Meanwhile, the A40 runs east to west across Hillingdon’s heart, linking Central London to the Colne Valley and the M40.

Rightmove’s latest data shows that homes in Hillingdon sold for £446,531 on average over the last year (January 2022). This is an increase of four per cent compared to the same period a year prior. Semi-detached properties drove much of the market, selling for around £480,057. Terraced properties came in slightly lower at £424,011, while flats achieved £266,803.

At around £1,305 PCM, rental prices in the borough are currently below London’s average (£1,752 PCM). One-bedroom properties were cheaper at £1,065 PCM, which rises to £5,200 for five-bedroom homes. These figures are based on daily snapshot data provided by Home.co.uk and may have changed since publication.

If you’re wondering which new homes in Hillingdon are worth the price tag, now is your chance to find out. We have based our Top 10 on feedback from actual residents, who rate and comment on everything from the design and management to the on-site amenities and sense of community.

In first place is be:here Hayes – a residential development comprising 119 one, two and three-bedroom apartments. Winner of several HomeViews awards over the last few years, it offers commercial units, including restaurants, leisure amenities, and a music venue.

In addition, the development is close to Hayes & Harlington station, the M4, M25 and Heathrow Airport. Residents seem happy about the area’s ongoing regeneration and having supermarkets nearby. Reviewers also compliment the ‘spacious and well thought out’ furnished flats and love the roof terrace and communal courtyard. They describe the complex as clean, tidy, and secure.

In third place, Drayton Garden Village is a large, mixed-use development with 775 residential units. It offers one, two and three-bedroom apartments and studios and a range of one, two, three, four and five-bedroom apartments. The development is only a 5-minute walk away from Stockley Park Recreation Grounds and a 17-minute walk away from West Drayton station, which has links to GWR services.

Voted into fourth position, Padcroft is a residential development with 308 units across three buildings. The development is located in Yiewsley, a 2-minute walk from West Drayton station, which runs GWR services into London Paddington and Central London. High street amenities are nearby, with canal walks also on your doorstep.

Securing its place in the top five, Homesgate Place comprises 183 residential dwellings with a range of one and two-bedroom apartments and studios alongside a mix of one, two, three, four and five-bedroom houses. The development is a 7-minute walk away from Barra Hall Park, and a 19-minute walk away from Hayes & Harlington station. Residents enjoy having access to communal gardens and green spaces and describe the flats as spacious and ‘value for money’.

Park West is a residential development by St George and our sixth most popular development. A selection of one, two and three-bedroom apartments in West Drayton, residents benefit from the surrounding scenic green parklands and nearby Heathrow Airport and Thorpe Park.

Local amenities, restaurants and cafés are within walking distance. Convenient links operate to Westfield Shopping Centre, which has a terrific choice of shopping, entertainment and travel links. The development features a gym, well-maintained gardens, and a concierge service that help with taking parcels. There is also a bus stop about 5-minutes’ walk away, and a Tesco just a little further.

In seventh place, Arena by Barratt Homes features 261 residential units with a mix of one, two, three, four and five-bedroom apartments. The development is located in Hayes and only a 29-minute walk to Hayes & Harlington station, which offers links to GWR and TfL rail services. Residents tell us that the area is a quiet, family-friendly community.

Waterside Park is a joint-venture development by Barratt Homes and Taylor Wimpey in the far westerly suburb of West Drayton. Rated into eighth place, the apartments sit next to The Grand Union Canal and the Fray’s River. Waterside Park is a ten-minute walk from West Drayton Station, which is due to form a stop on the Elizabeth line with the arrival of Crossrail services at the station. Properties are available to rent, buy, and let as short-term serviced apartments.

One resident told us that the development has a beautiful and elegant design with spacious rooms and allocated parking. They also said there are plenty of green surroundings to enjoy, including a park with three ponds, the canal, and children’s play areas, all close to the high street.

Our penultimate development, Highfield Court in West Ruislip lies just a 6-minute walk from West Ruislip station and a 13-minute walk from Ickenham Underground station. It comprises 415 one and two-bedroom apartments and four and five-bedroom houses and is surrounded by various green spaces, such as Colne Valley Regional Park. The leafy area features a golf course across the road and some nice bars and restaurants, with residents also praising the community feel and functional layouts of their flats.

High Point Village – a residential development from the Ballymore Group designed by Rolfe Judd – completes our Top 10. It comprises a selection of studio and one, two, three and four-bedroom apartments. Commuters benefit from the local Hayes & Harlington station being just a stone’s throw from the development.

The local amenities include a post office, Barclays bank, an Argos and a Tesco. Residents comment on the 24-hour concierge service, the fantastic pool, spa and gym, the well-maintained green areas, and having access to a new app for updates and parcel collections.

Ready to explore all the new homes in Hillingdon reviewed by our verified residents? Then check out the area guide below.