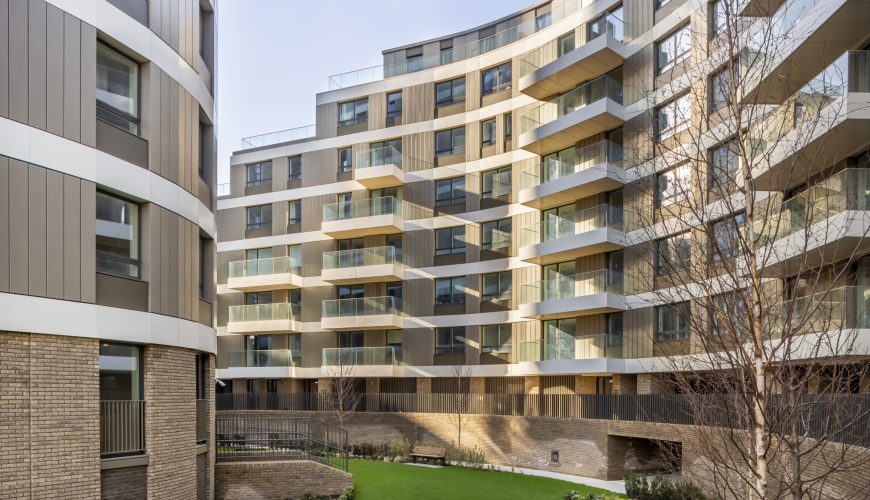 With the world-famous stadium acting like a magnet for visitors and investment, Wembley Park is constantly adding new property developments. The choice of smart, modern apartments set against the backdrop of Wembley Stadium is quite extensive, so where to start? If you’re looking for some of the best places to live in Wembley Park, then take a glance at the top-rated developments chosen by reviewers on HomeViews.

Living in Wembley Park – What can you expect?

Wembley Park has changed a lot since 2007. This was when the new stadium opened and later prompted a £2.5 billion regeneration plan for the whole area. Today, Wembley Park is a fast-tracked success story that’s a thriving modern district full of opportunity and convenience.

Location-wise, this northwest corner of London is highly desirable. Not only does it have a great range of amenities locally, Wembley Park also has excellent bus and tube lines. The Metropolitan and Jubilee Line will get you into central London in just two stops, in around 15 minutes.

And, if you want to get out of London to clear your head, you can be in the heart of the Chilterns Area of Outstanding Natural Beauty (AONB) within 30 minutes.

More immediately to hand, Wembley Park has a buzzing food scene that represents practically every major regional cuisine. Established restaurants compete with a thriving pop-up eatery industry that keeps things fresh. BOXPARK Wembley is the heart of the food scene here, as it hosts dozens of international outlets. You can try every flavour the world has to offer without ever leaving Wembley Park.

There’s a good range of property types and prices in Wembley Park. These range from pricey apartments with prime views and luxury settings, to more affordable prospects outside of the park’s most desirable locations.

On average, Wembley Park property sells for around the £500,000 mark. Prices have remained pretty steady throughout 2020-2021, despite the pandemic. The same goes for renting here, with average rates of around £540 per week.

Now it’s time to take a closer look at some of the best-ranked property developments in Wembley Park. *PLEASE NOTE these rankings take into account how recently reviews have been submitted, so may not match the overall star ratings shown. More recent reviews are given a greater weighting to reflect current building performance.

Our top-rated development is right in the heart of Wembley Park, sitting within a larger redevelopment right by Wealdstone Brook. Set amongst a thriving international community, Wembley Parade is the quintessential Wembley Park living experience. With excellent transport links, it’s also easy to get from Wembley to Central London. Wembley Park Station is only a 4-minute walk away, and it has direct connections to Kings Cross, Liverpool Street, Paddington, London Bridge and Canary Wharf via the Metropolitan and Jubilee lines.

It’s another smart listing at number two; Wembley Park Gate has 211 apartments, ranging from studios, to one, two, three and four-bedroom apartments. Included in the complex are over 70 shops, restaurants and coffee shops and a range of offices. This makes it an exciting place to live and work, and residents highly rate the atmosphere and general helpfulness of the staff here. The development is located a short walk from Wembley Park Underground station, which serves both the Jubilee and Metropolitan lines.

In third we have Montana & Dakota, a residential development from Build to Rent developer Quintain Living. There are 140 apartments on site, with a range of one, two and three-bedroom apartments available. Residents have access to a range of facilities including a residents’ gym and a hireable cinema room. In addition, there are two resident lounges with Sky HD TV, a pool table and free Wi-Fi. Wembley Park tube station is also close by, as are a great variety of shops, restaurants and bars.

At number four it’s Landsby by the Build-to-Rent developer Quintain Living. Also located in Wembley Park, it features a relaxed, scandi-led interior design, with 295 studios, one, two and three-bedroom apartments. John Lewis & Partners co-designed the furniture whilst Samsung co-designed the kitchens. In addition, there are a range of facilities on site including two separate roof terraces and two podium gardens, one with a children’s play area. Likewise, residents can enjoy a communal kitchen with a private dining room as well as a residents’ lounge.

To round off the list we’re staying in Wembley Park. Alto, which is also by Quintain Living, features 120 modern apartments right in the centre of Wembley Park itself. There’s a great range of studios, one, two and three-bedroom apartments available here. In addition, residents can enjoy a variety of facilities across the site. These include a residents’ gym, sky terrace, a dedicated lounge and kitchen, as well as multiple work-from-home pods. Wembley Park Underground Station is also a short walk away, with good connections to Central London via the Jubilee and Metropolitan lines.

Wembley Park is one of the most dynamic districts in North London, and there’s always something new to see here. Take a look at our area guide below if you want to get a better understanding of what’s on offer.

Slap-bang in the middle of Brent – London’s most ethnically diverse borough – is colourful, chaotic Wembley Park. Thanks to its melting pot of cultures, it’s something of a window onto the world. Restaurants here span spice-scented tandooris and exotic Middle Eastern eateries, and Read more about Wembley Park

The post 5 best places to live in Wembley Park appeared first on HomeViews.