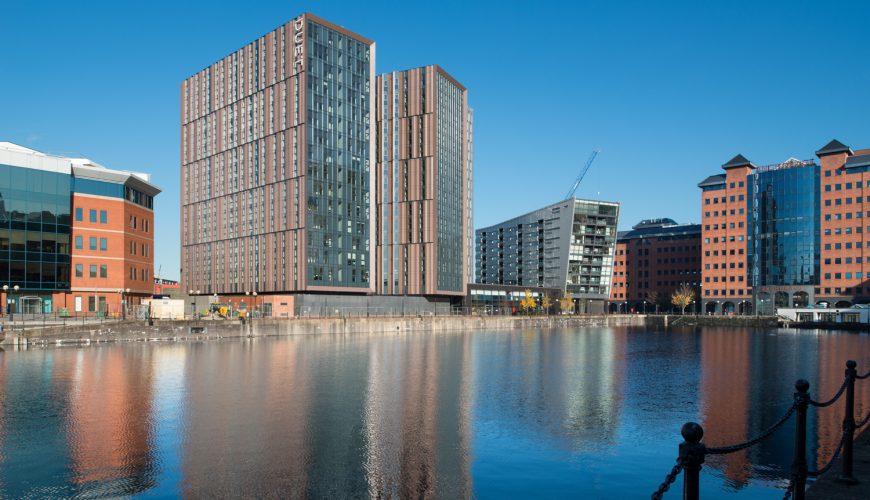 Even though you’re not in the city centre, you will never be bored in Salford Quays. From the Lowry Theatre, to the big VUE cinema, numerous sporting facilities and even the Imperial War Museum North, there’s a huge amount to do packed into a relatively small corner of the city.

While there’s plenty on your doorstep, it’s also easy to get out and about. The nearby Metrolink and good bus routes open Salford Quays up to the city centre. Media City, the glimmering hub for dining, shopping and, well, media, is also within easy walking distance.

And let’s not forget the views! Wherever you are, wherever you live in Salford Quays, you’re never far from a stunning waterfront vista.

In October, according to Zoopla, the average price for property in Salford Quays was just shy of £261,000. Prices have remained steady during the past 12 months. As mentioned, flats make up the overwhelming majority of property sales in this area, and follow the area average price. Terraced houses currently sport an average of around £275,000.

It’s time to take a closer look at the developments that have caught the attention, and reviews, of verified residents on HomeViews. Given that Salford Quays is changing so quickly, make sure to check back for updated rankings soon.

Our top-rated development in Salford Quays is Duet, which straddles both Media City and Salford Quays, offering fantastic views on either side. There’s a great range of local amenities, including 15 bars/restaurants, shopping outlets, leisure facilities, a cinema, a theatre, and a nursery. The development itself comprises 270 pet-friendly 1, 2 and 3-bedroom apartments to rent. In addition, the building also provides a 24-hour concierge service. Finally, it offers extensive communal spaces, including a fully equipped private gym.

In at a close second is The Green Rooms development, managed by AmroLiving. It sits near Media City and looks directly onto the Manchester Ship Canal. It offers a range of 1 to 3-bedroom apartments for rent. Additionally, the development benefits from being pet friendly, waterside views, a residents’ gym and bike storage. The Green Rooms is also just a few minutes’ walk from the excellent transport links and amenities available in Media City.

Read reviews and details of The Green Rooms MediaCityUK, M50

In at number three, Clippers Quay is right in the heart of Salford Quays. Designed by Leach Rhodes Walker Architects, it offers 600 1, 2 and 3-bedroom apartments. Residents here can enjoy an on-site gym, residents lounge, cinema room, work zones and private gardens, with all facilities received high praise from reviewers across the board. Its central location makes it easy to enjoy everything Salford Quays has to offer, and is ideal for accessing bus and tram routes on residents’ doorstep.

Located just on the approach to Waterfront Quay, The Gateway is a rental development by X1. The location is ideal for accessing nearby MediaCity, Old Trafford and central Manchester. On-site facilities include a gym, and there is a Metrolink and Tesco’s conveniently on the doorstep of the development.

Read reviews and details of X1 The Gateway, M5

Even though it has a perfect score, this development is a further down in the list because it only has one (very enthusiastic!) review so far. Lightbox Media City is right next to The Green Rooms development, which means that it enjoys all the benefits of being on the doorstep of both Salford Quays and Media City. Residents here enjoy the excellent views and quality hotel-level design of the apartments.

Manchester is a city on the up and up, with vast amounts of investment capital constantly pouring in. Check out Manchester’s development hotspots and best places to live citywide, and discover why this city is at the heart of a property revolution.

Manchester is the second largest urban area in England, and is often thought of as the UK’s second city. Located in the north west of England nestled between Liverpool and Leeds, Manchester is also reportedly the UK’s fastest growing city economically. The area’s 2.8 Read more about Manchester

The post 5 best places to live in Salford Quays appeared first on HomeViews.